The Waiting is the Hardest Part...

Folks spend a lot of time waiting. Waiting at the drive-through, waiting for the cable guy, waiting in line at the grocery store, waiting for the doctor's appointment you were told to arrive fifteen minutes early for just so the doctor can make you wait that extra quarter-hour, on top of the usual half-hour or so. It's claimed that blood pressure readings may be a bit faulty at the doctor's office, showing higher due to the patient's nervousness. I say it's anger. Who is happy waiting?

Here's the one you Westfield folks understand all too well: Waiting in traffic. Always guaranteed to kick the old pump up a notch. Sure, at first you might be patient. Hey, you're smart. You planned for Westfield gridlock. You gave yourself plenty of time to get where you're going. You pop a CD in. Must have entertainment if one's going to be waiting. (We might know what we want at McDonald's, but we still read the menu while we're in line there.) You relax in your seat. The light turns red at the intersection ahead of you.The one you have to get through. The light you can see but just can't seem to reach. The all-too-short green beacon of freedom. Then it changes again. Is that two or three you've sat through now? Hey no sweat. Good tunes. Maybe wipe the dashboard down a little. Man, they get so dusty with all this construction. The song changes on the CD. It's the one you don't really like. You didn't know that until just now, when it started and you were immediately irritated. Is it really Jon Bon Jovi's fault? Or is it the traffic? Either way, that's enough of the music. Off it goes. Music is for good times. Waiting in Westfield traffic doesn't qualify as good times. As a matter of fact, one more damn light and you're going to go GTA on the mess. Maybe run up a few lonely sidewalks or zip up an empty oncoming lane. Oh Westfield, I love you but I hate your arteries.

Inevitably, the question pops into folks' minds when they're sitting in Elm/North Elm Street traffic: When is that darn new bridge going to be done? Just one more thing we have to wait for. But, in reality, the Great River Bridge Traffic Improvement Project, despite some setbacks, is moving steadily along. If you recall, Governor Patrick came to our humble city on May 11, 2007, for the official groundbreaking for the $55,000,000+ project, the most expensive public works undertaking in Western Massachusetts to date. Figuring that was about eight months ago, and also considering the several week-long work stoppage due to permitting disputes over the summer, progress is indeed being made, as shown by this series of 14 photos taken between July, 2007 and January, 2008. These photos were taken from the south side of the Westfield river looking north, from the small parking area off the foot of Meadow Street. The structure pictured is a temporary platform construction crews will work off of during the building of the new three-lane bridge, which will be just a bit upriver.

The new bridge is expected to be completed within 3 years, with rehab work on the existing Great River Bridge adding a couple of years on the backside of that. More waiting. But in the end, it will (hopefully) be worth it. Then Westfield residents might get back down to what "experts" claim is the average amount of time folks spend during their lives waiting in line: two to five years. Yikes. 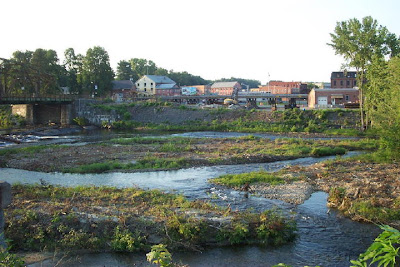 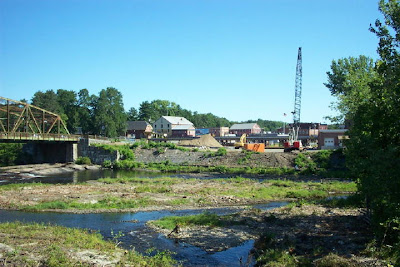 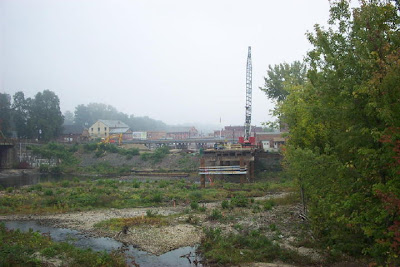 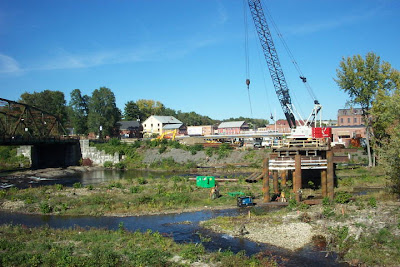 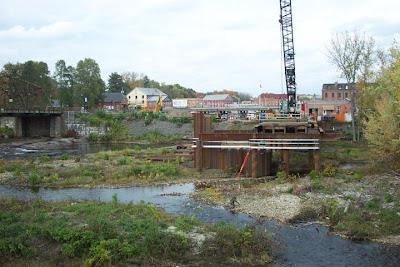 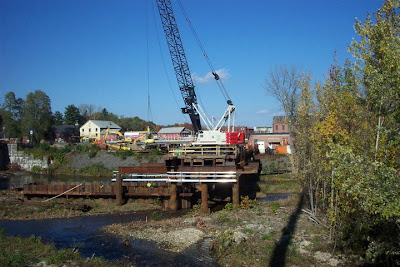 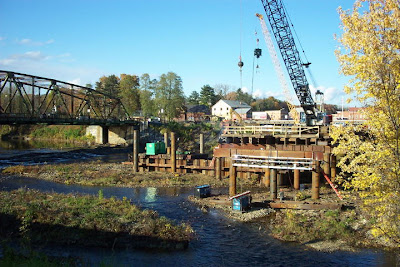 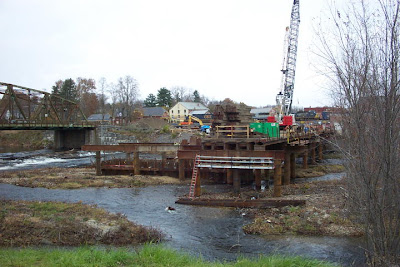 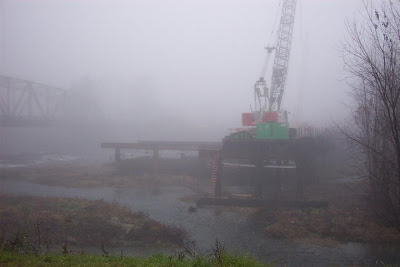 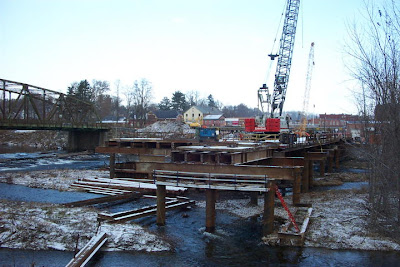 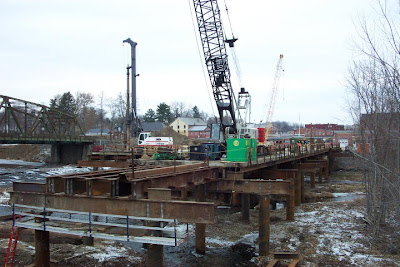 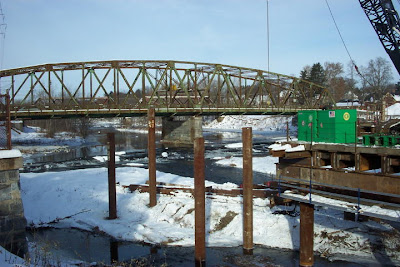 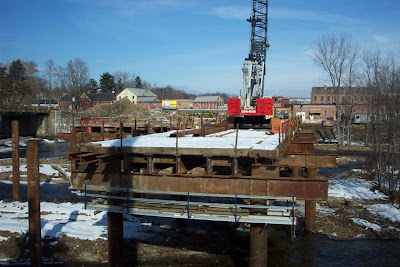