Photos: Trestle and Tracks, Images of Westfield in a Thanksgiving Fog 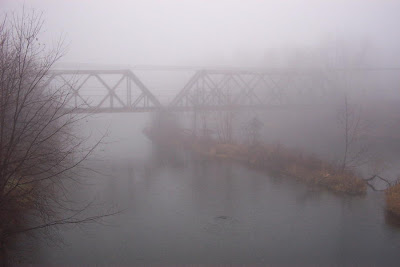 An eyesore or a sculpture? A bridge unused becomes a span of iron beams riveted together into patterns utilitarian and pleasing to the rational eye. Shrouded in fog, it is a mystery novel on the tip of the tongue. What riders have crossed this link between banks? What thoughts were in their possession? What deeds were journeys laid for? Everyone has a train tale. 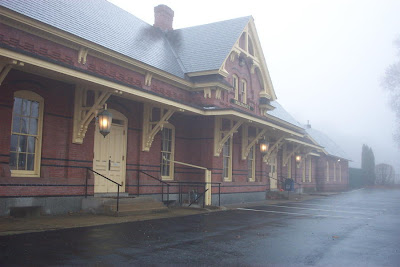 While the nation teems with traveling masses in modern transportation hubs, Thanksgiving morning finds the Westfield railroad depot alone, lights on as if to welcome forgotten spirits taking advantage of the early fog to relive the holiday platform reunions of a century past - the depot long having surrendered its importance and purpose to the passage of time and scale-tip of alternate transportation. Offices now, the octopus has no arms. 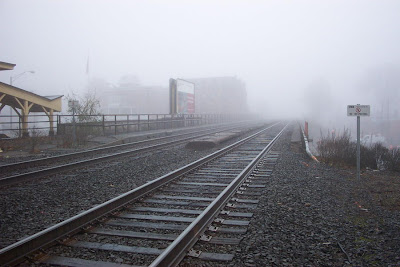 The Hotel Bismarck and the Buschmann Block are hulking specters looming eastward in the thick and low cloud covering Depot Square like a descending shroud. Whatever may approach along the quickly invisible tracks only known by the future, a tendered surprise escaping from the wrapping of mist, anticipated with unease. 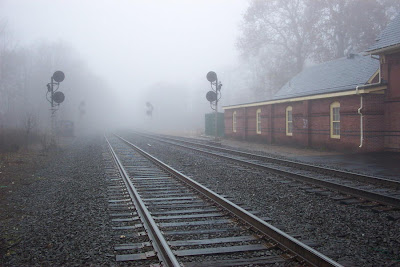 An empty platform on Thanksgiving morning. Surely everyone is not truly where they want to be? No. 'Tis the march of days that make the trains pass Westfield now, warm lighted windows displaying faces of those click-clacking through on silver streamlined carriages, homage paid with a conductor's quick pull of the whistle. The station's only stop the casting of passing eyes. 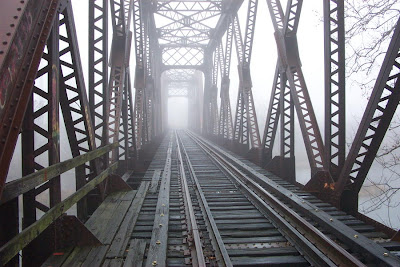 The direction is south on the compass, 'tis true: but where does the straight rail lead when it is thick a'fog? Can one ever be sure without taking that first step into the unknown? Opaque is the future of man.

One of the earliest Main Streets in the country, Springfield's central thoroughfare has long been a continuous parade of cacaphony and character, offering a unique conglomeration of everything the city has to offer...And more. Dissimilar building styles as loud and obnoxious as a clashing tone-deaf, symphony have long been a staple of the illustrious architects and builders of the city canyon that rises from both sides of the street, with a narrowness belying its history, unplanned and early, its first pedestrians' and riders' New World dreams as such that the street was indeed to them a grand avenue as opposed to the thick and untamed forest from which they had carved it.

The following postcards of Main Street, Springfield, Massachusetts, are from the Shaffer Collection, kindly donated to EWM by local historian Barbara Shaffer to share with you. 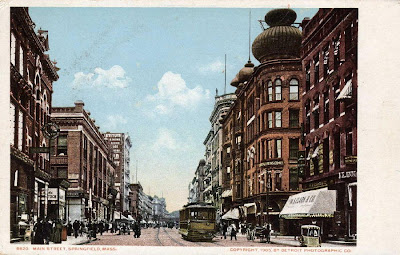 The distinctive minarets of the Fuller Building, on the north-east corner of Main and Bridge streets, serve as a point of reference in this postcard. If you were standing in the middle of Main street looking north on a fine day in 1905, such as the one captured timelessly here, this is the visual you would have soaked in. Of course, if you lingered there long enough, you stood a good chance of getting run down by one of the cars of the Springfield Street Railway, a horse and wagon, or even one of those newfangled automobiles the Duryea brothers were running around town in. The eight-story Worthy Hotel, on the corner of Worthington and Main streets, is a couple of doors up from the Fuller Building. The railroad arch is in the far distance. The north-west corner of Main and Worthington streets, diagonally across the street from the Worthy Hotel, was occupied by the edifice of the U. S. Post Office and Customs House. 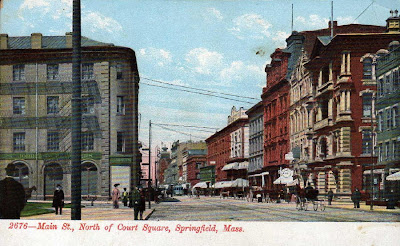 Another view looking north up Springfield's Main street, circa 1901 - 1907. Although horse and buggy or foot power seem to be the predominant methods of perambulation - and, of course, the street railway, which would set you back a nickel - a careful look at this postcard reveals the presence of a pair of bicycles outside Smith & Murray's department store on the left, waiting patiently for their owners to return from downtown errands or obligations. The Five Cents Savings Bank is directly across the street, on the north corner of Main and East Court streets. Hmm...Save...Or ride? A moot point if one spends the nickel on penny candy. 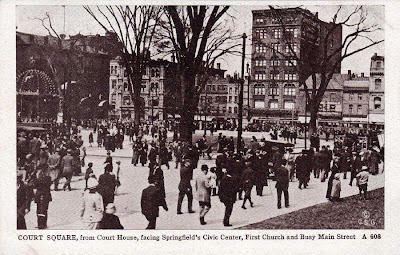 A busy Court Square under barren trees and gray skies suggests either early spring or early winter in this "photo-type" postcard created by George S. Graves in Springfield. Smith & Murray's department store, established in business on the corner of Court and Main streets in 1879, is the dark building on the far left. The Five Cents Savings Bank is across the street from the store. Since 1972, the 6,677-seat MassMutual Center (formerly the Springfield Civic Center) has dominated the landscape on the east-side of Main street, between East Court and State streets, and would consume much of the backdrop of this view today. 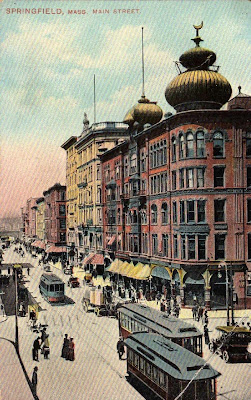 Another view of the Fuller Building, on the north-east corner of the intersection of Bridge and Main streets. The railroad arch is in the far distance, to the left in the post card. According to Springfield author and architect, Eugene C. Gardner, writing in 1905, the arch is "a utilitarian work of great dignity and beauty, the latter not always recognized because of its simplicity. If it were in an old city of France or Italy, Baedeker would give it double stars and American tourists would love to talk of it to their friends at home."

Unlike the previous three postcards, this postcard has traveled through the mail and is postmarked April 26, 1909, 6:30 p.m. It is from "Papa" to a Miss L. A. Smith, and states simply: "This is a fine town." Nice.

Photos: Over the River and to the Crane

The Great River Bridge Traffic Improvement Project is rolling right along in Westfield, Massachusetts. A temporary platform has been built from which work on the center support for the new bridge spanning the Westfield River seems to be steadily progressing. I took this series of photos of a dump truck backing up on the narrow scaffold this past Tuesday, coming for another load of riverbed offered by the crane's hungry bucket. I have a lot of admiration for a person who can make the difficult look easy, as this driver did. I would be in the drink for sure. Heck, I can't even drive in a straight line going forward. It's no wonder trucking is considered a "high-risk" occupation. With fuel prices and fees going up, trucking has become a tough industry to compete in as well. At work one day, an owner-operator in for a repair on his truck and lamenting the high cost of staying afloat asked: "Want to know how to make a small fortune? Take a large fortune and go into the trucking business." To the truckers we owe bridges and baked-goods, towers and tea. Thanks, folks. 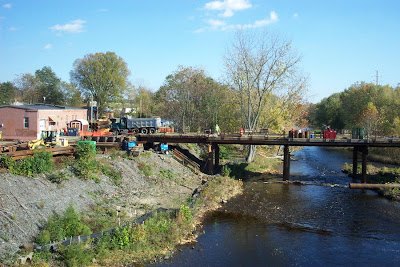 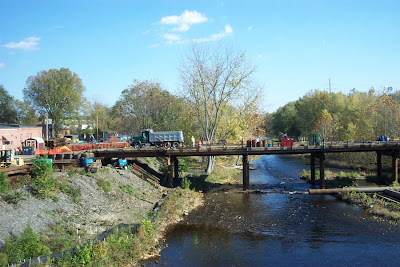 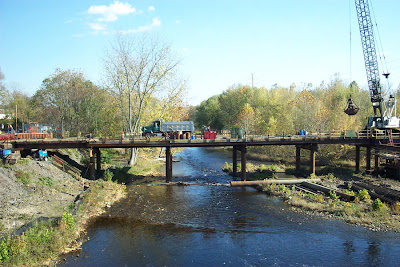 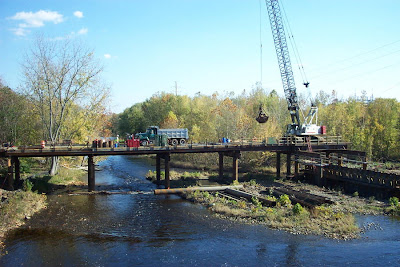 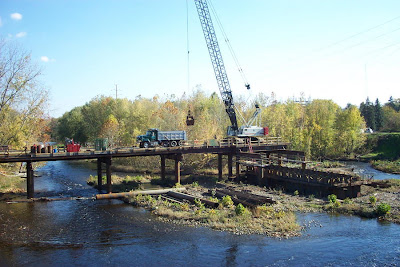 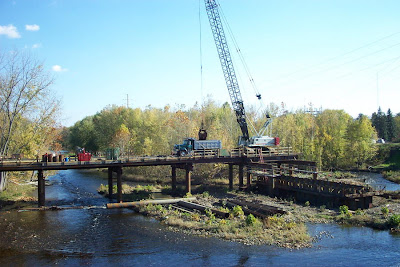