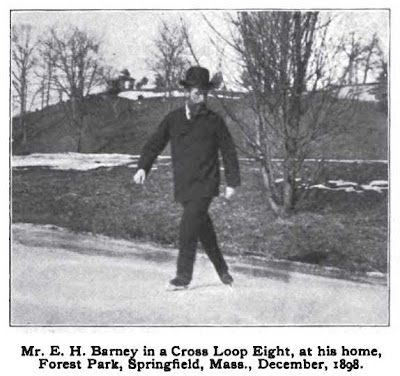 Everett Hosmer Barney (December 7, 1835 - May 31, 1916), Springfield resident and major benefactor of the city's Forest Park is probably best known for his invention of the clamp-on ice skate, for which he received his first patent in 1864.

One of Barney's many other patents, awarded in 1868, was for a perforating machine that could stamp the amount due on a check, or the words "canceled" and "paid."

Here Mr. Barney is seen demonstrating his prowess on his product in a photograph from the 1900 book, A Handbook of Figure Skating Arranged for Use on the Ice, written by George H. Browne, A. M., and published by the Barney and Berry Company in Springfield.

As always, thanks for stopping by and take care.
Posted by Mark T. Alamed at 4:36 AM 5 comments