"A Salute to the Greatest Generation" is the theme of the ever-popular Great New England Air Show and Open House, presented by the fine folks at Westover Air Reserve Base in Chicopee, Mass. Rain or shine, the gates will open at 8:30 a.m. on August 4th and 5th, with a kick-off breakfast sponsored by the Galaxy Community Council August 3rd. Parking and admission are free.

For more information on this well-attended event, visit the Air Show website at www.greatnewenglandairshow.com. For details on the kick-off breakfast, go to the Galaxy Community Council website at www.galaxycouncil.com.

Here are photographs of some of the birds that will be taking to the Western Massachusetts skies to sing their thunderous songs of strength and security, an awesome display of the training and talents of the people who work everyday to keep this great country of ours safe and free.


All of the images above are from the official website of the United States Air Force at www.af.mil/photos.

Westfield's Municipal Building Gets a Facelift 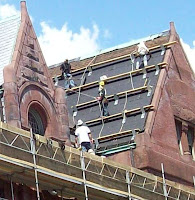 A century and a score since its dedication as a State Normal School on June 21, 1892, the building that has housed the city of Westfield's Municipal offices from the late 1950s on is getting a well-deserved facelift. Scaffolding has wrapped the tired edifice in its promising embrace, anon dismantled to reveal a relic's rejuvenated skin, a face for the future. 'Tis a welcome sight, a work site worthy of the first Westfield structure to be listed on the National Register of Historic Places, that distinctive date occurring on March 8, 1978. 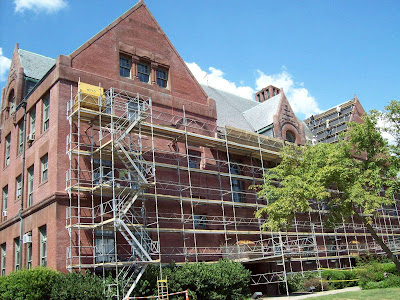 Built at a cost of $150,000 to replace the old facility on Washington Street, the Commonwealth stretched about six and a half decades out of its investment before cramped and thoroughly antiquated quarters ("archaic" according to the eyes of Massachusetts Governor Paul A. Dever in 1951, on campus to speak at the June 23rd commencement ceremony) forced the decision and drive to move onto bigger and better things, an educational expansion that would one day transform a city wood known as Juniper Park into today's bustling and still-growing Westfield State University. An exchange of one dollar from Commonwealth to city secured the original 26 acre Western Avenue site of horse trails and shady glens and likewise a dollar from city to Commonwealth facilitated the purchase of the 59 Court Street structure, the agreement stipulating the building to be utilized "for municipal purposes only." Chapman Water Proofing, Inc. of Boston has been contracted to perform the current renovations at a cost of $3,400,000, a sum which would have allowed the building to be replicated another twenty times in 1892. 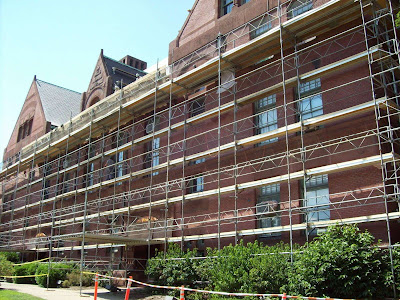 Granite, brick and brownstone under the cover of a slate-tiled roof, the Romanesque design - the work of Boston firm Hartwell and Richardson, established 1881 - is reminiscent of renowned architect Henry H. Richardson's style, but the two interests are indeed, separate. Although neither gained the stature of H. H. Richardson in northeastern architectural circles, many of Henry W. Walker and William C. Richardson's (and later, third partner James Driver) structural accomplishments have made their way into the National Register of Historic Places, including the town hall in Ware, Massachusetts. A local example of Henry H. Richardson's work is the old Hampden County Courthouse on State Street in Springfield. 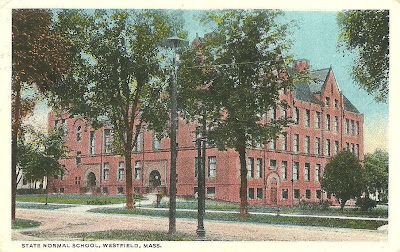 Postmarked in wintertime Westfield of 1921 and mailed for a penny, the handsome building of higher learning - in a postcard frozen - had by then hosted nearly thirty years of students, matriculating and moving on through its double front archways, the fits and starts of a dawning age of excitement in education anchored by the stalwart's granite foundation whilst soaring peaks overhead encouraged opening minds to move above and ever beyond. Today, the edifice is Westfield's municipal anchor, a tether to the community, a well-known face passed on Court Street, finally getting a makeover.

Getting there, via Google maps: http://goo.gl/maps/8dmH