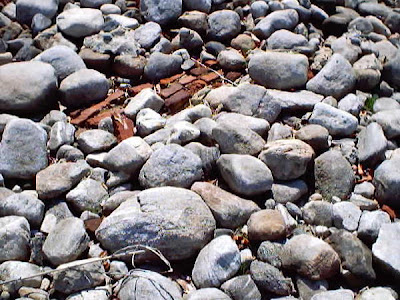 Bricks 'n' stone on the eastern shoreline of North Dana. North Dana was a village of the town of Dana, Massachusetts. The four towns of Dana, Prescott, Enfield and Greenwich - located in the Swift River Valley - were flooded for the creation of Quabbin Reservoir, which is part of Boston's public drinking water supply. 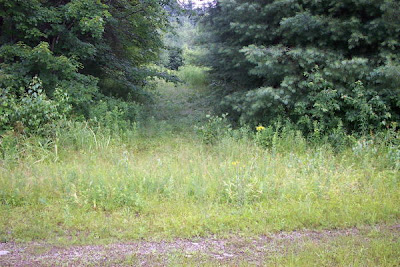 Overgrown entrance to the former Wade family property in Petersham. 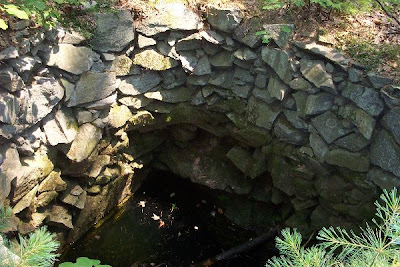 The old community well for the village of North Dana. This well, located on the hill above the North Dana's village proper, is about eight feet in diameter and very deep. It provided gravity-fed water to the village below. 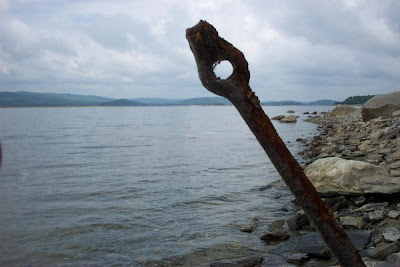 Eye bolt lagged in stone on the western shoreline of North Dana. 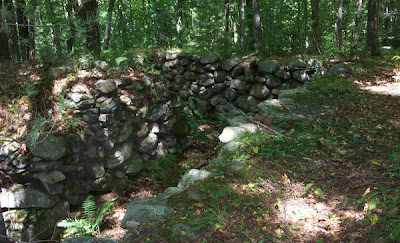 Cellar hole near Gate 37 in Petersham. 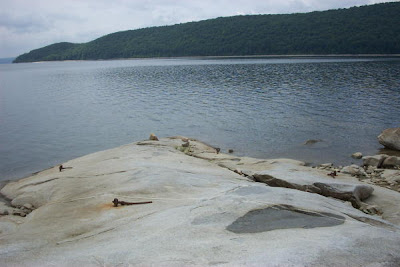 Lag bolts sunk in stone near Methodist Point on the southern shoreline of North Dana. The flooded village's Methodist church was located just offshore from this area. Mount L is in the background. The foundation of the former homestead of the Hale family in North Dana. 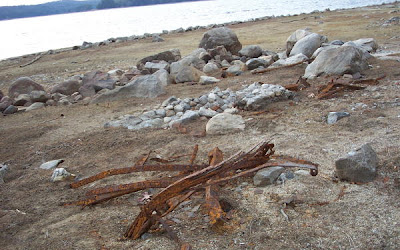 Leaf springs uncovered at low water on the eastern shoreline of North Dana. The flooding of the Swift River Valley commenced on August 14, 1939. On June 22, 1946, Quabbin was filled to capacity (412 billion gallons) for the first time. 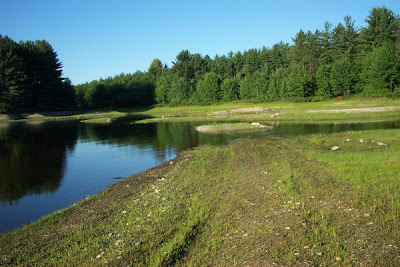 The Monson Turnpike - running along the eastern shoreline of North Dana - looking south. 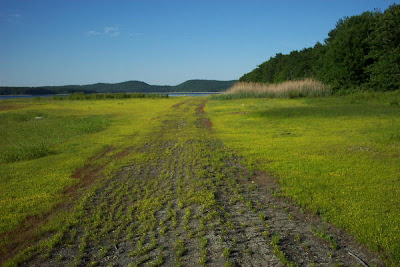 Some of the asphalt of the old Monson Turnpike road remains though decades have passed. This segment traverses the eastern shoreline of the village of North Dana on its way to Greenwich, Enfield and Belchertown and other points south. 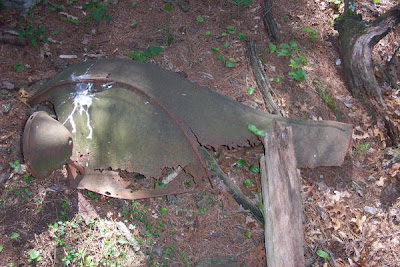 An old car fender battles the passing of years and march of nature in the woods of North Dana. 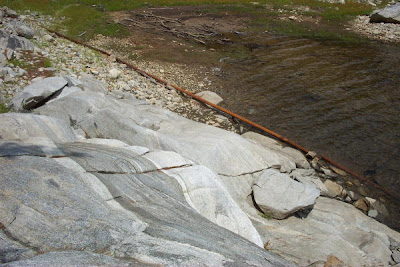 An old water pipe on the southern shoreline of North Dana. 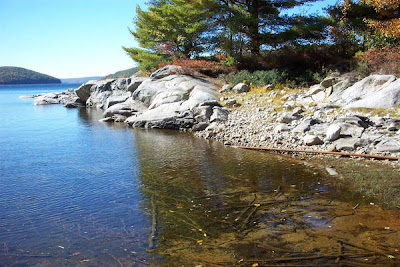 Bits of broken glass, china and brick accompany this old water supply pipe in the mix of memory along the southern shoreline of North Dana. Terrain-wise, North Dana became a peninsula with the flooding of the Swift River Valley. 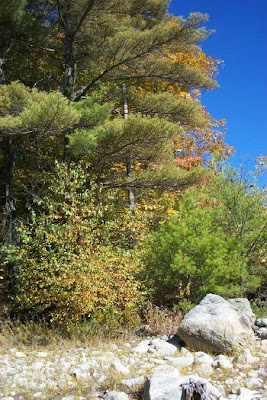 An old telephone pole lurks in the trees incognito on the southern shoreline of North Dana. 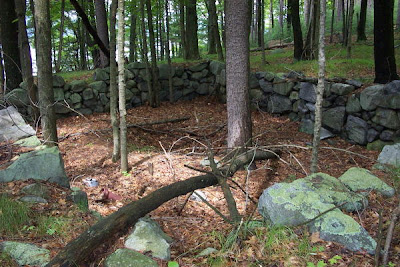 North Dana's Rohan family once made their home here. Some of the abandoned foundations encountered in exploration look solid enough to build on still. 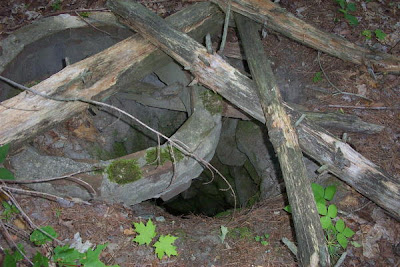 A well north of the Rohan home in North Dana. 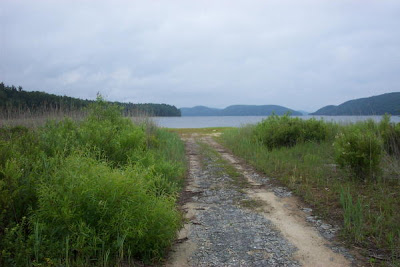 The end of the line. Old Route 21 fades away to the south on the eastern shoreline of North Dana.


For more on Quabbin Reservoir, take a look at the EWM exclusive The Quabbin Chronology: A Timeline of the Swift River Valley, or visit EWM's The Quabbin Page, a collection of dozens of Quabbin-related links.


Merry Christmas and Happy Holidays to All! 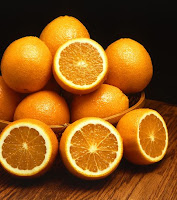 Traveling a bit east today and in light of the season, here is a story of Christmas-past from the Depression-era Works Progress Administration's Federal Writers' Project. The project was part of a government-backed effort to put writers to work during hard times by setting them to the task of capturing everyday Americans' life stories, or parts thereof. Material from the project can be found in abundance at the Library of Congress web site in the American Life Histories: Manuscripts from the Federal Writers' Project, 1936 - 1940 section.

The story isn't exactly heart-warming - Edward O'Neil is downright irascible - but there is a certain poignancy to his memories, as there is to all of ours.

Edward O'Neil was born in Brookfield, Massachusetts, the son of Daniel O'Neil, an Irish immigrant and Sarah Pritchard, daughter of a foreign missionary. Daniel O'Neil a railroad worker and farmer was a hard bitten man with little education and a decided contempt for any on who had. Mrs. O'Neil was gentle and sweet, but completely terrified by her domineering husband. For years they lived in a small house in an isolated part of Brookfield. Edward O'Neil has always lived in Brookfield. When very young he refused to go to school and no one in the family made him. He has never done much work - odd jobs now and again, but has depended on his hardworking sisters to keep him. He scorns any part in the community affairs except to criticize - something he does well and often.

His only "special skills" are negative - a large and colorful vocabulary of cuss words and a flaming temper which he does not attempt to control. He is tall and rugged with keen blue eyes and a voice that can be heard all over town. He says he is eighty-three years old, in spite of the town records which list his birth as November, 1858. The town records are wrong, of course.

Edward O'Neil, who lives on the old North Brookfield road, is one of Brookfield's oldest but most vigorous inhabitants. I met him the other day just as he was finishing a five mile walk, his hands full of bitter-sweet, lovelier than I have ever seen around here. "Oh, where did you get it," I exclaimed. "I won't tell you," he snapped at me," if I did - you'd tell some one else - then they'd tell someone and purtty soon every fool in town would be goin' there to get some an' there wouldn't be none left. I like it myself an' I'm goin' to keep it fer myself long's I kin. I'll give you a piece though, long's you want some so bad." He selected a long branch with care. "I'm saving this for Christmas" he added. "What was the first Christmas you actually remember?" I asked. In his faded eyes I saw a far off dreamy look. "The first Christmas I remember was when I was four years old. The reason I remember it was because my mother gave me a big lump of brown sugar with a few drops of peppermint on it. I nibbled at that sugar a little bit at a time all day long and I can taste that peppermint to this day. You see, we were sort of pioneer people and we didn't have much - nor not much to get anything with. Every winter in my early days was hard times. "The only other present my mother had to give that Christmas was a quarter of a dried orange peel and she give it to my sister to put in her bureau drawer to make her clothes smell sweet. My father didn't know much about Christmas. He'd been brought up by the Indians. His parents had been killed by redskins and he lived with the Indians until he was nearly twenty. My mother's parents were missionaries and of course she knew all about Christmas.

"I don't remember much about the Christmas's that came after that one when I got the lump of sugar with the peppermint on it, until I was twelve years old when my father gave me six boughten fish hooks. We made most of our fish hooks by forein' 'em ourselves before the fire. About that time my father got to flat boatin' down the river. Some time he'd be gone three or four months and when he came back he'd bring back things like store clothes and boots, and once he brought me a tie and then my mother'd hide 'em away and keep 'em and give 'em to us for Christmas. And from September 'till Christmas us kids'd have lots of fun huntin' around over the house and wonderin' what we was goin' to get.

"When I was fifteen my mother gave me a rifle of my own for Christmas. My father'd got it in Boston and this, with the exception of the one when I got the peppermint sugar, was my best Christmas.

"I was a grown man almost twenty-one before I ever saw a Christmas tree. A German family moved near us and they had a tree every year. They dipped the little candles themselves, colored 'em red with poke berry ink and fastened 'em on the trees some-how with wild turkey ribs. I never'd seen anything so purty in my life as those Christmas trees. We had to work awful hard in them days but we had our fun same as we do now. Well, if I don't run acrost you again, I wish you Merry Christmas." And away he went, being stopped at every half block by someone who wanted to know, "Where did you get that lovely bitter sweet?"

But he only snapped "I won't tell you."