A good source to check occasionally for upcoming local history happenings is the Springfield Museums' web site, specifically the "In the News..." page.

Here are some old photographs of the area of State Street near the library and museums, scanned from the 1905 book, Springfield Present and Prospective, published by Pond & Campbell. 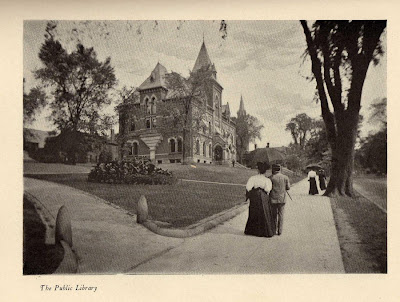 The Springfield Public Library on State Street was completed in 1871. In 1892, the edifice was renamed "The William Rice Building," after the librarian who had by then spent over three decades as Springfield's steward of letters, starting in 1861. The City Library Association had been formed only four years earlier, their book collection housed in a borrowed room at city hall beginning in 1857. A bronze tablet displayed at the entrance to the library commemorated the dedication with these words:


"This building erected in 1871 on land given by George Bliss with money contributed by Springfield citizens stimulated by the zeal of John L. King and Daniel L. Harris, the first two presidents of the City Library Association, was by vote of the directors May 10, 1892, named

in honor of the man who as librarian from 1861 to 1897 devoted thirty-six years of enthusiastic service to his native city in the development of a great educational institution for the free use of all the people."


In January, 1912, as a result of an endowment of $200,000 from Andrew Carnegie and the generosity of Springfield citizens, the current library building opened, replacing a beautiful structure that had become too small to house the food stores of Springfield's literary appetite. 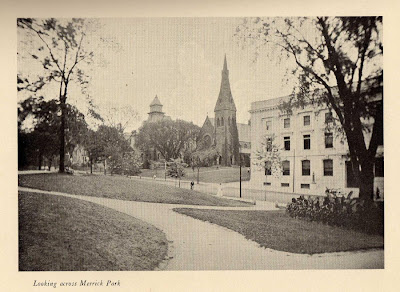 Located directly across the street from Merrick Park, at the corner of State and Maple, is the Springfield Fire and Marine Insurance Company building, which opened its doors for business at this location on July 3, 1905. Seven private estates were purchased and razed to make way for the structure. Prior to its State Street move, the company, incorporated in 1851, had its headquarters on the corner of Fort and Main Streets. The building now serves as home to Springfield's School Department. The Church of the Unity, opened in 1869, is next door, opposite the city library, which is adjacent to Merrick Park. The cupola of the old high school is visible a little further east up State Street. 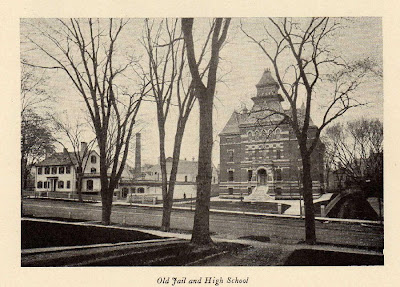 This photo by E. J. Lazelle was taken sometime after 1874, the year the Springfield High School was built, located conveniently across the street from the city library. The county jail, having been replaced by the jail on York Street in 1887, was eventually demolished to make way for the "new" Central High School, which was built on the site in 1898 to meet the city's growing demands for classroom space. The high school in the photo was then utilized for the younger grades, and was known as State Street Grammar School. The jail was erected on land purchased by the county in 1814 for $500, and was built thereabouts at a cost of $14,164. 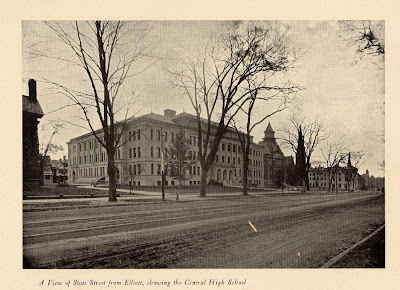 The "new" Central High School has taken the place of the old county jail in this A. D. Copeland photograph, snapped sometime around 1905, which was the year the Springfield Fire and Marine Insurance Company's new building was opened, visible down the road a ways looking west - or to the right in the photo. In 1922, a 115 foot-long annex was built on the west end of the building, the addition becoming the Junior High School. In 1934, the name of the school was changed, and "Central" became "Classical" High School. The school closed in 1986 and has been converted to luxury condominiums. 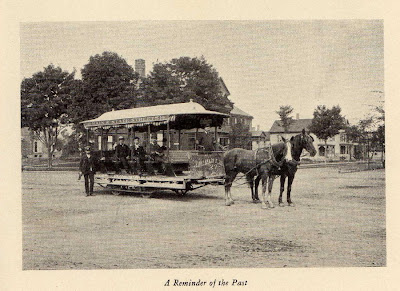 A horse car from the Springfield Street Railway Company's State and Main Street route, circa 1870s. The Railway Company was incorporated on March 16, 1868. Its cars were electrified in 1890.

For more Springfield history, check out EWM's, The Springfield Chronology: Settlement to City, a time line of the city's past.

As always, thanks for stopping by and take care!

Reading your account of State Street history is as good as walking the route. As always, thanks for a great job, Mark!