Author Frank W. Kaan, in his article 'Historical Sketch of Pittsfield,' published in the January, 1885, issue of The Bay State Monthly, describes the layout and character of that town in the late 19th century as such:


"The four principal streets of the town, named from the points of the compass, meet at the Park. North street contains the bulk of the stores and business places. On the corner of West street is the building of the Berkshire Life Insurance Company, which was incorporated in 1851, and has always included among its Directors and Managers the best business men in the town and county, who naturally take great pride in it as one of the soundest Life Insurance Companies of the country. In the same building are three national and one savings bank, besides the town and other offices. Immediately beyond is Mr. Atwoods drug store, an establishment of long standing, which would bear favorable comparison with any similar store as regards either attention or knowledge of a druggists duties. Farther along the same street are Central Block and the Academy of Music. In other parts of Pittsfield broad streets, lined with tall elms and shady horse-chestnut trees, invite our footsteps. The dwelling-houses are mostly of wood, built in the cottage and villa styles of architecture; many are stately edifices; many are hospitable mansions; all show unmistakable evidence of being comfortable homes. Scattered over the township, each springing up around a mill or two, are miniature villages. Their population is largely made up of foreigners, Irish and Germans, whose condition appears to be somewhat better than that of the same class in cities. Both sexes are represented among the operatives. The mills, mostly small, are located with a view to an opportunity for using water power, yet none are without steam power as well. In the same neighborhood are the large farms and expensive estates of the mill-owners, the wealthiest class in the community. Between the villages, in fact, upon all the roads, every turn brings in sight pleasing views which never repeat themselves or become monotonous."

Relatively soon after Kaan's short history was published, in 1891, Pittsfield - originally incorporated as Pontoosuck Plantation in 1753 - was incorporated as a city. Perhaps Kaan was a bit off in his observation six years before, that: "Pittsfield, although one of the largest towns in the country, is not ambitious to try a city form of government."

The following photographs from the Library of Congress, Detroit Publishing Company Collection show the young city's Park Square and its spokes of streets - named with the simplicity of the compass - in the early 20th century. 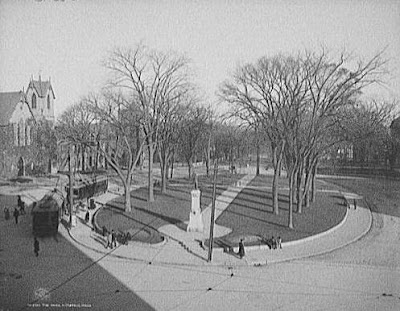 Park Square, circa 1906. The First Congregationalist Church on Park Place is the building on the left in the photo. To the right of the church, obscured by trees, is Pittsfield's City Hall, located on the corner of Park Place and Allen Street. The streetcars were operated by the Berkshire Street Railway. The soldier's monument is on the west side of Park Square. 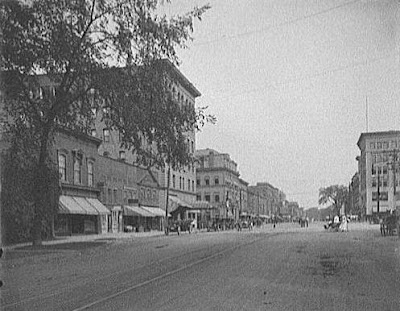 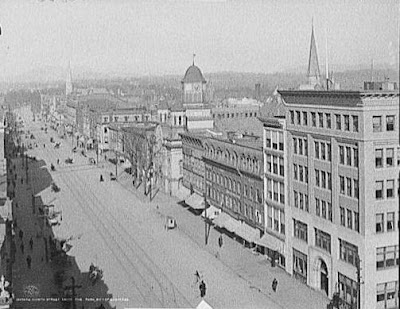 North Street, circa 1906. The Berkshire County Savings Bank is the building to the far right in the photo. The building further up North Street - in the center of the photo - with the tall dome-roofed steeple, is the First Baptist Church. Narrow, and hardly discernible, School Street separated the church from the Geer Block to its south - to the right of the church in this photo. At the end of School Street, where it met Allen Street, was Pittsfield's Central Fire Department station. 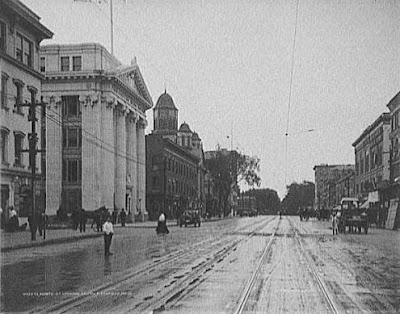 Looking south down North Street towards Park Square, circa 1905-15. The distinctive domed spires of the First Baptist Church are conspicuous against the gray and raining sky. 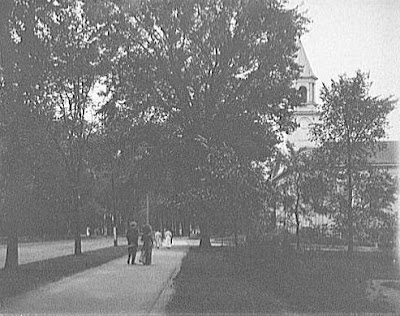 South Street from the east, circa 1905-15. The South Congregational Church is seen through the trees, on the corner of South and Church Streets. 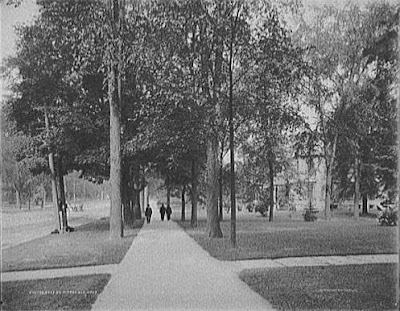 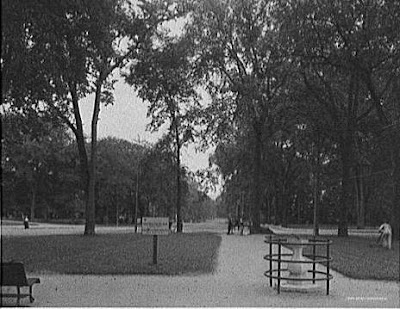 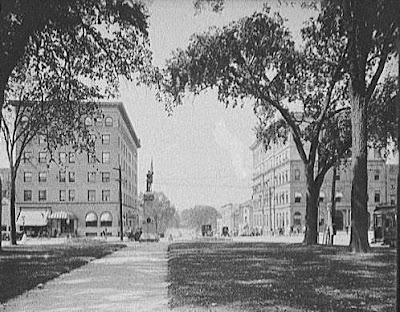 West Street from Park Square, circa 1900-15. The Wendell hotel is the building on the left, occupying the corner of South and West Streets. Across the street, to the hotel's right , is the Berkshire Life Insurance Company building. on the corner of North and West Streets. Union Station, Pittsfield's railroad depot, was straight ahead up West Street. It didn't take long from the time the first locomotive rolled into Pittsfield on May 4, 1841, for rail service to become an important facet of the city, linking its mills and people to Albany and Boston and points beyond.


For a look at 1899 Pittsfield from a pigeon's perspective, check out the EWM post, Map: Bird's-eye View of Pittsfield, Massachusetts, 1899.

Pittsfield, my hometown. What a treat to see these photos, ghosts of Pittsfield past. But the Park Square of long ago is still recognizable today.

wow, how great these pictures are. Our home town history. My mom had told me north and south streets at park square had once been as it is now, a straight shot, without going around park square. Very cool to see.

It's a pleasure to see these photos of the city where I was born and raised. There's something very special about Park Square, North St. etc. While the city has changed quite a bit, the basic structure is the same - that hopefully will never change.